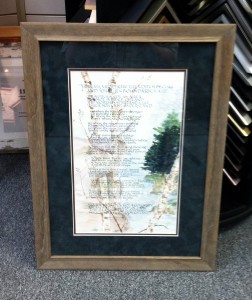 The story of this poem as told by our client Gary:

Once, I had a colleague at work across the hall, and we got to know each other pretty well. We both had a fondness for northern Minnesota, and eventually, during one of our many conversations, we realized we both had cabins on the same lake. Such a coincidence!

One day, sadly, this friend of mine suffered a stroke and massive heart attack. His son ended up coming to work to clean out my friend’s office. In the process he tossed out some old stuff, including a poem by an unknown Canadian author, that my friend and I both really liked. I rescued the poem however, and read it to my friend in the hospital. He was in a coma, but it seemed he could hear me anyway. Later, we used the poem at my father’s funeral.

My mother had an artist make a watercolor of the poem done in calligraphy. I have the original and each of the family has copies. At this point, The Poem of the North by this unknown Canadian author, has become a family tradition with great sentimental value to us all.

Any information someone might have about the author would be greatly appreciated.

NOT SURE WHAT YOU WANT?

Come on in and we can help! Snap a couple of photos of where you plan to hang your project and grab a paint swatch if you want. We can help you with color selection and layouts and even provide an emailed layout if you like. We’ll make it look great in your room!

Our prices are very competitive and our finished product is second to none. We’ve been at this business for over 20 years and know all the tricks that allow us to turn out a product that will make your home, office, or business look great.

Need a little help deciding what you want?  Check out some examples of our work to get some ideas!

Expert custom framing services for all your artwork and memorabilia. From photos, posters, and diplomas to flags, jerseys, golf balls from a hole in one—the only limit is your imagination! Locally owned & operated, Frame Minnesota has been in Eagan for 25 years, providing exceptional work at great prices for the south metro area AND far beyond.

We’re happy to answer questions and provide a ballpark estimate. Just fill out this form and let us know what we can do for you!

FIND THE FRAME THAT’S RIGHT FOR YOU