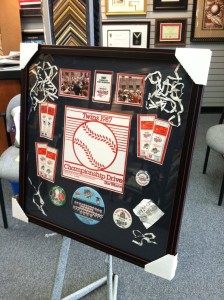 Remember when the Twins won the World Series…for the first time—1987? This is actually a project we did recently, in April,  for a guy who saved ticket stubs, a homer hanky and even confetti from the big parade held to celebrate. It was a crazy day and this piece brings back the memories for me! I love the confetti pieces, which were mostly shredded computer reports. There is even a pair of earplugs that were handed out at the stadium for those who could not take the super loud cheering sounds from their fellow fans. #throwback Thursday #Tbt #twinsmemorabiliaframong — atFASTFRAME EAGAN MN. 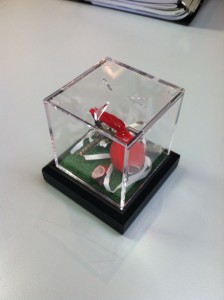 The pic above is a little add-on item we did for our client. If you can’t quite tell what is happening from the picture, well it is a decapitated Cardinal. In case you don’t remember, it was the Cardinals that we met–and ultimately beat–in the World Series. My client had a little plastic Cardinal, decapitated and all,  that he’d saved.  He wanted it in the framed collage but it really did not fit in the frame well. So I made him a little display box for that little guy–complete with a bit of a turf mat, a little stick and some of the confetti/ticker tape. I got a really nice smile from him upon pick up!

NOT SURE WHAT YOU WANT?

Come on in and we can help! Snap a couple of photos of where you plan to hang your project and grab a paint swatch if you want. We can help you with color selection and layouts and even provide an emailed layout if you like. We’ll make it look great in your room!

Our prices are very competitive and our finished product is second to none. We’ve been at this business for over 20 years and know all the tricks that allow us to turn out a product that will make your home, office, or business look great.

Need a little help deciding what you want?  Check out some examples of our work to get some ideas!

Expert custom framing services for all your artwork and memorabilia. From photos, posters, and diplomas to flags, jerseys, golf balls from a hole in one—the only limit is your imagination! Locally owned & operated, Frame Minnesota has been in Eagan for 25 years, providing exceptional work at great prices for the south metro area AND far beyond.

We’re happy to answer questions and provide a ballpark estimate. Just fill out this form and let us know what we can do for you!

FIND THE FRAME THAT’S RIGHT FOR YOU